I Didn’t Know Ponds and Cigars Could Do That 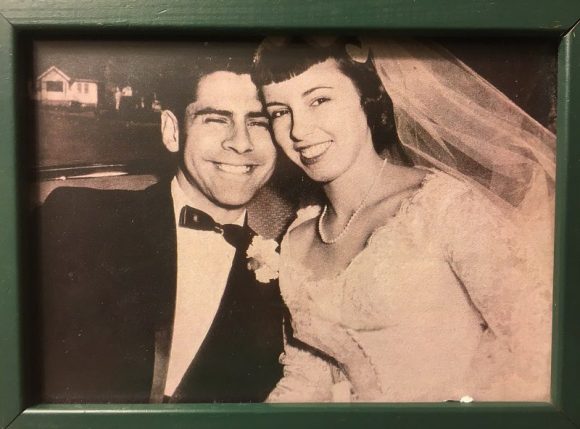 Pardon the crookedness of this photo. I wasn’t planning to publish it. These are my maternal grandparents on their wedding day. I’ve always liked this photo. A lot. (Image/Matthew Fray)

That’s my grandparents on their wedding day about 62 years ago. It’s one of my favorite photos.

The handsome gentleman on the left died last night, just one week after his 85th birthday.

Father of eight. My mom’s the oldest.

Grandfather of 23. I’m the oldest.

Great-grandfather of three. My son is the oldest.

Nearly 40 years ago, my grandparents traveled 400 miles west to be with my young parents at the hospital.

My dad was 23. My mom was 21. My mom had received a college scholarship far from home, and that’s where she met my dad while she was in school.

I was supposed to be dead, according to the doctors and nurses. They told my parents and family to expect the worst.

But then I lived anyway, because I don’t always do what I’m supposed to.

My father handed my grandfather a cigar at the hospital. Wrapped in plastic. Blue ribbon.

When I was 3, my grandparents again drove west from Ohio to visit me and my parents.

While someone wasn’t looking, I decided to run off into the woods on the edge of our lot. I wandered those woods for more than an hour.

I came across an elevated storm drain spilling rain runoff into a creek bed.

While it was likely just some nasty corroded old water drainage infrastructure, it looked magical through the prism of a 3-year-old.

I thought it was a waterfall.

Then I wandered some more.

Eventually, I heard my grandpa’s voice cutting through the woods. Calling my name.

He must have been terrified. But he wasn’t angry. Not only wasn’t he angry, but he let me take him by the hand and blindly wander those woods again searching for that shitty waterfall I was so excited to show him.

I never found it again.

He never got angry with me.

Not long before my 5th birthday, my mom and dad divorced and then my mom and I moved into my grandparents’ big farmhouse with them in rural Ohio.

They lived on 43 acres, which felt to me like Oz.

They had a small pond, just a little over an acre in size on the other side of a field, far enough to drive to.

There was a little one-room wooden cabin with an old cast iron wood-burning stove that I never saw anyone light or use. Rustic. Dusty. Bugs. Smelled old.

But we called it “the cottage.” And it was perfect.

There was a weeping willow tree close by—a large one—where you could usually find the empty shells of cicadas stuck to the bark of the tree trunk.

If my grandfather wasn’t taking me on a fishing trip to a large nearby lake, or to watch me fail at fly-fishing in the river, we were catching fish at the private pond.

With his youngest son—my uncle—about to finish high school, it must have been perfect timing having me show up to live with them.

He included me in everything age-appropriate.

Not a huge talker. Not like me. He was a doer.

He didn’t really have to say anything, because what he DID was always so transparent. His actions always told the story.

Dragonflies would buzz around. Wind would stir the trees and tall grass. Grasshoppers. Crickets. Bullfrogs.

The relative silence of the great wide open. The only nearby machine being that fishing rod and reel providing life-sustaining therapy I never even knew I needed.

I didn’t know fishing in a pond with my grandfather could do that.

Two years ago, my grandparents celebrated their 60th wedding anniversary, and my son got to be there for that. When my grandparents, both in their 80s took to the dance floor at the reception hall to share a dance in front of everyone, my great-uncle—my grandma’s brother—faux-scolded my grandpa: “Keep your hands off my sister!”

More than 60 years of marriage. Eight children. All the grandkids. Health problems. Friends dying. Watching all of the good and bad things happening to all of the branches on his family tree.

I doubt he thought of himself as the patriarch of the family, the way most of us looked at him, but that’s all I could ever see.

A man who loved and served. Steadily. For 20 years longer than I’ve even been alive.

Last summer, my family flew in from all over the country for a family reunion at my grandparents’ house. My grandpa’s last one. Everyone knew it.

I was outside talking to everyone. Someone sent word that my grandpa was asking me to come inside. He had something he wanted to give me.

His kidneys were failing. He was going through dialysis. Painfully. And he didn’t want to. But my grandmother didn’t want to say goodbye to him no matter how in love with Liam Neeson she might be.

So he persevered. Because that’s what you do when you love someone.

I sat on the couch nearest his easy chair. The man was tired. Physically weaker than I’d ever seen him.

But his eyes were clear. And so was his mind.

He handed me a cigar.

I’d never seen it before and thought it was strange that my non-smoking grandfather was handing me a tobacco product.

“Your dad gave that to me in the hospital the day you were born. I thought you should have it,” he said.

I stared at it for a moment, digesting the implications. It looked almost new.

This is the one. It’s resting on my bedroom nightstand. I didn’t know a little thing could be worth so much. (Image/Matthew Fray)

My father—long-divorced from his oldest daughter—had handed him a cigar nearly 40 years earlier celebrating my birth.

Then my grandpa raised eight children. Entertained hundreds of friends and family members in that old farmhouse through the decades. Ran a business. Moved to a smaller house nearby 10-15 years ago.

And throughout all of that, he took care of a cigar.

Because it mattered, I suppose. Because it represented the grandson who lived when he wasn’t supposed to. The grandson he found in the woods. The one he must have thought would be somewhat of a stranger to him growing up, but was then granted an entire childhood with because of life circumstances no one ever saw coming.

I didn’t know cigars could do that.

The last thing my grandfather did was fight to stay alive as long as he could because my grandmother wanted him to.

He didn’t have to spin any stories. He’d just hand you a cigar, and you knew.

He didn’t have to tell everyone how much they were loved—particularly my grandmother.

Because he gave his last breath living it.

And if you’re guessing that’s something I can latch onto and feel proud of today, you couldn’t be more right.