Stop Waiting Until it’s Too Late 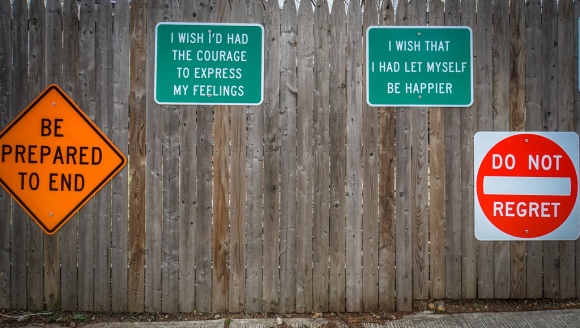 There was something I wanted to tell someone and I was just waiting for the right time. But then he died before I saw him again.

The funeral was beautiful. As beautiful as a funeral can be, anyway.

It’s been a few years since my last funeral, I’m fortunate to report, but a couple of things stood out to me beyond the pain, grief and sadness everyone was feeling to varying degrees, and the brutal suffering of a couple of people on my personal I Love These People the Most list.

Life lessons, if you will. Obvious ones.

But despite their obviousness—and critical importance—almost everyone loses sight of, or forgets, them every day.

2 Lessons About Life & Relationships We Learn at Funerals

There are more than just two. These are simply what stood out for me while people cried in my arms or while listening while long-time friends of the departed eulogized him eloquently and tearfully.

If you think about life and death hard enough—and most of us won’t because the idea of dying or losing our loved ones makes us too uncomfortable (I’m not judging—I bury my head in the sand, too)—life kind of boils down to a contest to see who can die while feeling the most internal peace.

The contest “winners” are everyone who faces their impending death with total peace, having lived a regret-free life where they did all they could, gave all they could, and that their family and friends will remember them fondly because the way that they lived made them a great family member or great friend.

Like, I totally need to get my shit together. But I’m really good at waiting until it’s too late.

It’s probably not accurate to categorize these things as lessons. They’re observations that will surprise approximately zero people, but there’s a good chance you’re not remembering them during everyday life.

We’ll call these observations “sub-lessons” that live under the umbrella of the primary lesson no one ever remembers: Everyone Dies, and We Usually Don’t Know When.

1. We Treat the Dead, Terminally Ill, and Grieving Differently

I’m sure the terminally sick, handicapped, and people grieving the deaths of those closest to them resent being pitied and treated like fragile victims once the initial shock wears off.

But that doesn’t stop us. We typically treat people MUCH differently when we learn they’re dying, that they might die, or that someone very close to them just passed.

I’m not the kind of person who verbally berates strangers (not counting all of the things I mutter toward shitty drivers that would probably make Jesus and my grandma really sad), but sometimes I see people get pissed and say mean stuff to the restaurant wait staff, or hear them dress down some customer-service rep on the phone who’s probably making less than $10 per hour to field complaint calls from strangers all day, every day.

Maybe some of the people getting their ears chewed off deserve it. Probably a few. I just think if they had a sign hanging around their neck announcing that their mom died a few days ago, or that they had a terminal illness that would kill them in the next few weeks, that most people would treat them with a certain amount of kindness and patience.

Which begs the question: If our spouses/romantic partners, our children, siblings, friends, co-workers, etc. are all going to die, and that will be among the worst things that ever happen to us, changing our behavior toward them and enhancing our feelings about them… then why are we sometimes or currently being stupid assholes to them about things that don’t really matter?

Taking it a step further—so many men report the same experience I did at the end of my marriage—that we didn’t see it coming, or that we didn’t know that certain things were causing her so much pain.

We say that if we HAD known, we’d have made better choices.

But if something is legitimately the most important thing in your life, why would you EVER show enough neglect to jeopardize it? How could that even be possible?

But we do. So many of us do. For the same reasons we forget that we, and everyone we know and love, are going to die.

2. It’s Difficult to Leave Something Behind, But We Should Make it Count When We Do

The man who died was a musician. A talented one. Even better than I’d realized when he was still alive and I could have shared my admiration and appreciation.

His nephew, a doctor and pastor, was the primary officiant at the funeral, and he talked about two things in particular that affected me.

The first was his encouragement to the rest of us to live our best lives (which, HINT: is the entire point of this article as well), in which he shared author Bronnie Ware’s five biggest regrets expressed by the terminally ill from her book The Top Five Regrets of the Dying:

Because those are good reminders of things most of us are probably getting wrong to some degree.

And the second thing that stood out to me during the pastor’s eulogy was his observation of how rare it is for most people to leave something behind for people to remember them by after our deaths.

Some career and life paths don’t lend themselves to so easily leave something tangible behind the way artists, construction crews, and parents are able to.

What a gift, I thought. What a gift to be able to write things down that occasionally matter to people. Maybe I shouldn’t wait until it’s too late to finish a book.

What a gift, I thought. What a gift to be able to adjust our behavior toward some people who really matter to us, even if it takes a terrible loss to trigger it and help us refocus.

Maybe we shouldn’t wait until it’s too late to actually behave with the love we say we feel for those who matter most.

Because if we’re too busy putting our most critical relationships on hold in favor of stuff that won’t mean a damn thing to us during their funerals, then I think it’s fair to say we’re probably doing it wrong.

But we don’t have to keep doing so. While there’s breath in us, we can always make a better choice, no matter what life throws our way.

11 thoughts on “Stop Waiting Until it’s Too Late”