When You’re Too Comfortable to Know You Shouldn’t Be 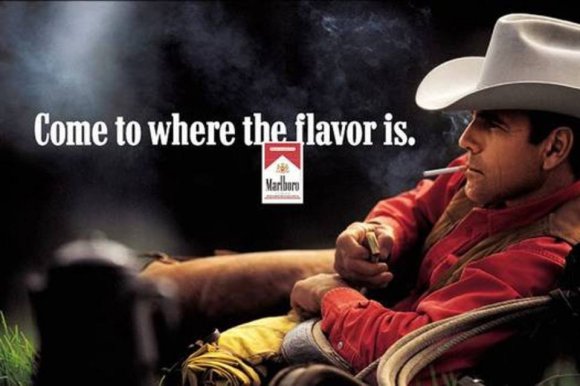 “Holy crap, that guy looks awesome. I’m going to start smoking Marlboros,” I probably thought to myself at age 15 — several years before the actual Marlboro Man in this magazine ad died from a smoking-related respiratory illness. (Image/BuzzFeed)

Sometimes I wonder whether I’ll die one day from a heart attack or cancer because of things I consume or do.

Like maybe I eat pizza or a cheeseburger or Milk Duds at the movie theater because, duh, but if in some magical alternate reality I received some type of clear signal from the future that making different decisions would save my life, I would totally NOT eat those things.

“Matt! If you keep drinking extra-large coffees with cream and ordering pizza you’re going to drop dead of a heart attack, but if you switch to tea and up the raw vegetable intake a bit, you’ll live a long-ish, healthy life! Get your shit together!”…

If Miss Cleo told me that, and I had good reason to believe she was telling the truth, I would adjust course.

It occurs to me that I order pizza, consume the occasional cheeseburger, and rock Milk Duds at the movie theater because I’m “comfortable.” I don’t assume I’m going to die soon, so I’m comfortable making choices I understand to be unhealthy.

At best, I sometimes mindlessly coast through life breaking a few things along the way. At worst, I am intentionally doing the wrong thing.

Because I’m comfortable. Because everything feels okay, even if everything’s not.

Comfort Kills Us in Other Ways Too

This whole thing—this Divorced Guy Writes Stuff and a Few People Care thing—started in July 2013 when I wrote my first-ever blog post that was intended to serve a purpose other than me simply word-vomiting emo shit on Day 93 of my wife leaving.

In An Open Letter to Shitty Husbands, Vol. 1, I told this little story about fighting with my wife because I wanted to watch The Masters golf tournament on a beautiful Sunday afternoon while my wife wanted me to accompany her and our infant son on an outdoor hike.

I concluded that I could have recorded the golf tournament on the DVR, and regret not joining my wife and son on that hike, because I perceive that time she was out walking our son in his stroller to be one of dozens or hundreds of moments where my wife must have stewed in her disappointment over my choosing golf on TV over spending time with her and our child.

I concluded that IF I had realized in that moment that it was a contributing factor to my wife leaving and losing 50 percent of my son’s childhood, that I would have made a different choice.

That post still gets read a lot, and predictably, I’ll get the occasional blog comment from some guy frustrated by what he read there—presumably because he has the same sort of argument with his wife or girlfriend.

“You’re such a pussy, dude. There’s nothing wrong with wanting to watch a golf tournament that’s only on once a year!” says some guy standing 50 feet below the point sailing over his head.

OF COURSE choosing to watch a golf tournament over going on a hike ONE TIME is a non-issue. Of course. What level of Idiot Mastery must one achieve to read that story—then assume every other aspect of my marriage throughout its history was rosy and perfect—and conclude that my wife randomly freaked out like an insane person over one brief moment in time in which she and I wanted to spend an afternoon doing different things?

The point of that story was to convey my newfound understanding that it WASN’T the moments of conventional significance or importance that sealed the fate of my marriage. It was the collection of a million tiny moments where I disappointed or hurt my marriage partner without doing enough to eliminate or relieve that pain, or offer enough other positives to make a life with me feel like a net-positive.

She spent months—years, maybe—having an internal conversation: “Do the good things about him, or about being with him, outweigh all the bad?”

The answer to that became self-evident when she moved out on April 1—exactly 93 days prior to me thinking about and sharing the story from that otherwise-routine Sunday afternoon a couple of years earlier.

Just like eating a bunch of pizza, donuts and bacon cheeseburgers can eventually cause a person’s heart to stop without warning, our marriages and relationships can end from these moments piling up—these moments that hurt a person while their partner is unfazed. Because they don’t know or they don’t care.

And the reason they don’t know or care is because they don’t feel the need to be bothered with trying to figure it out.

One partner keeps hinting at a problem, but nothing feels wrong to the other.

Because the non-hurting partner is COMFORTABLE.

Everything’s fine. She’ll (or he’ll) get over it.

These people—too often men—can’t understand why it hurts when she sees him expertly adjusting his schedule to attend two different fantasy football drafts where he’ll drink and joke with his friends all day, assembling a fake team of players to “manage” for an entire football season.

“How is it that he can’t be bothered to make a dinner reservation for our wedding anniversary or adjust his schedule to come to our daughter’s dance recital, but he’ll jump through hoops to draft and manage an imaginary football team?” one might think or say.

Defenders and apologists will accuse me of being overly harsh on the fantasy-football crowd (of which I’m a proud member), but they’ll have to be disingenuous in order to do so. A wife or girlfriend who feels loved, included, thought about, cared for, valued, etc., will NOT ask these questions on fantasy football draft day.

For the rest of us: the truth hurts, I guess. Sometimes, fantasy football is something men seem to love more than wives and children.

I don’t think as much as I used to. I don’t drive around thinking about a new blog post, or contemplating life’s deeper questions.

Because of that, I haven’t been writing often. It’s not that I don’t want to. I do.

I just don’t have much to say.

My ex-wife doesn’t hurt me anymore. Enough time has passed and enough circumstances have changed where I don’t feel the sting of rejection like I once did.

I was worried about finding a long-term partner to fill the cavernous hole in my life. What’s going to happen now? What about my son? I can’t even breathe.

But then I could breathe. And our son in grade school is growing into a smart and handsome little man. And everything’s, just, okay.

And that’s all I wanted back then. When everything hurts and you think you might die, all you want is to feel like yourself again.

You just want to be okay.

You just want to feel “normal.”

There’s merit in comfort and contentment.

There’s real value—physically, mentally, spiritually and emotionally—in feeling balanced enough to just BE. To just be able to sit in a room at home alone, and be so comfortable that you’re not even really mindful of it. You’re just living on autopilot.

I think that’s how most of us do it. Autopilot.

It’s easy on autopilot because everything is habit and routine. It’s familiar. It’s comfortable.

And of course, you never grow or evolve or learn anything.

You don’t get smarter.

You don’t get stronger.

You don’t get better.

And now, in a moment of irony that almost made me laugh out loud as I type, I find myself wondering if it’s really such a good thing when “everything’s okay.”

The fear and pain pushed me to a place mentally and emotionally that truly helped me evolve into a wiser, more-capable human being.

I got what I wanted and naturally it wasn’t enough because of the human condition.

Maybe getting uncomfortable will get me writing again. Thinking again. Growing again.

Maybe comfort will doom me to a life where I never actually accomplish anything that matters.

Maybe getting uncomfortable can help people recognize unhealthy choices that might be slowly killing their relationships or their physical bodies.

Maybe comfort blinds us from truth, and prevents us from being who we were meant to be.

Because I want to be someone who thinks.

Even if it means battling a bunch of discomfort along the way.