The Subtle Difference Between Shitty and Non-Shitty Husbands and Wives 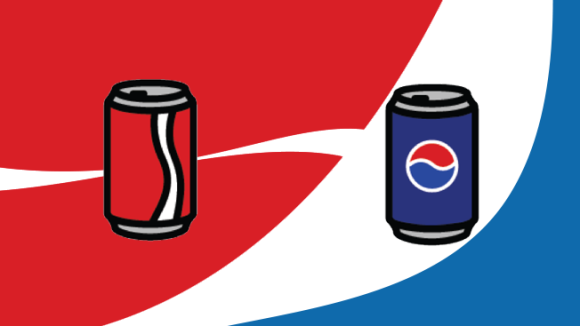 I don’t drink a lot of soda, but I think I could identify Coke vs. Pepsi in a blind tasting. But since they’re both cola, there are probably many people who cannot. And I think it’s fair to call the differences subtle. (Image/Adweek)

The difference is so subtle that I didn’t recognize it until now.

And now that I have, it isn’t hard to see why so many pissed-off guys stumble on these articles and miss it too. My own inability to tell the difference when I was married is WHY I’m divorced today.

In everyone’s defense, including my own, the differences can be hard to detect. Really hard. If it were easy, therapists and divorce attorneys would have trouble finding work.

It’s not only subtle, but ever-changing.

The shitty behavior of husbands and wives may be healthy and totally acceptable in different relationships with different partners.

It’s little wonder we have so many disagreements in our relationships.

I’m accused often of blaming men and husbands for the majority of relationship failures and divorce, and I’ve written sentences so strikingly similar to “I believe male behavior is responsible for the majority of divorces,” that I understand why some people feel that way. One of the best things about speaking these ideas someday as opposed to writing them now is that I think it will be easier for people to more-accurately gauge my meaning when they hear it vs. reading it.

More subtle than the flavor of Coke vs. Pepsi.

Even more subtle than the difference between the words “complement” and “compliment.”

“This is bullshit!” another guy said. “A wife’s expectations need a reality check in many cases, though others hearing the story are sure to think the husband is at fault due to the false ideas permeating our culture.”

Another guy characterized my ideas as old-fashioned and unrealistic. He said a few things I disagreed with, but then he asked a great question that I’ve been thinking about since:

“What about the seeming double standard—is this fair to men, or anyone, to expect them to be any less human, any less fallible or fragile than anyone else? Is it OK to suggest that men are not entitled to simply be loved for who they are as a person? Or should men be required to constantly earn love—not for who they are—but for what they can do or provide?”

You see, when I was married, I misdiagnosed the marriage-problem symptoms my wife and I displayed, and I was CERTAIN of my correctness in any given disagreement between us. I was right, therefore she was wrong.

Here I was doing or not doing all of these things she wanted me to do differently. And most of the time, I would draw a line in the sand—a boundary, if you will—and stand my ground. I—quite literally—believed my wife was being unfair, or reacting inappropriately to something (like a judge sentencing someone to life in prison for a speeding ticket).

I don’t know that I believed my choices were things I considered to be marriage-enhancers, but I DEFINITELY didn’t consider them to be things that might destroy mine.

Don’t you see the inherent danger there? For me, the scariest things in life are the dangerous, potentially fatal things that we don’t or can’t see coming.

I don’t sit around feeling fear over these things because I don’t give a lot of mental energy to them. But I absolutely believe they’re the scariest things.

The things we don’t see coming.

I believe the behaviors that end relationships, lead to affairs, and are ultimately responsible for divorce, are behaviors that MOST people don’t recognize or identify as a danger.

I wasn’t a bad guy. Most guys aren’t bad.

But I WAS a shitty husband. Accidentally. Unaware. Thoughtlessly. Not on purpose.

And because I was trained from a really young age that we treat ACCIDENTS radically differently than we treat INTENTIONAL harm and destruction, I usually defaulted to the position that the “punishment” of my wife’s frustration or anger didn’t fit the “crime” of whatever action or inaction had upset her.

This might sound familiar because I’m pretty sure the vast majority of people can identify with either my experience, or my ex-wife’s.

“But, Matt! You always say that you were a SHITTY husband! How do you know?! Maybe your wife was just being a control freak or an insufferable nag! Maybe SHE was the shitty one!”

You know what, maybe she was sometimes.

I don’t think about things like that. I don’t try to remember every time I felt wronged by her in some attempt to excuse or justify my choices.

My marriage ended and now my little boy has to share homes and CONSTANTLY miss one of his parents, and possibly suffer a little bit socially.

I did things that hurt my wife.

Not her face. Not her arms. Not anywhere on the outside of her.

In her heart. In her mind. In her gut.

I didn’t know when I was married that emotional pain could hurt worse than physical pain. When my wife would talk about feeling hurt, I consciously or subconsciously treated her like she was a crazy person. Like she was a child I perceived to be acting overly dramatic about a tiny scrape. Like she didn’t know how to rank or manage discomfort.

This is what it looks like to not possess empathy nor understand the word’s meaning. When a husband or wife proves incapable of displaying mindful, intentional empathy for the person they promised to love and honor forever, they are breaking their marriage vows.

I started coaching in 2019. Clients and I work collaboratively through current and past relationship stuff in order to improve existing relationships or to prepare for future ones. Other clients are trying to find themselves after divorce or a painful breakup. We talk by phone or video conference. People like it. Or at least they fake it really well by continuing to schedule future coaching calls and give me more money. If you’re going through something and think I might be able to help, it’s really easy to find out for sure. Learn More Here.

A shitty husband disregards his wife’s expressions of pain and treats her like there’s something wrong with her whenever he would have felt differently.

A shitty wife disregards her husband’s desire to feel appreciated as “payback” for feeling unappreciated herself.

A shitty wife berates and shames her husband anytime he performs a task differently than she would have.

“Where is the line between being responsive to your partner’s needs, and drawing a boundary around your own?” said MBTTTR commenter Lindsey in a recent conversation that inspired this post.

Is it possible that some husbands are having THEIR boundaries violated by wives who force husbands to earn their love and kindness, rather than give it freely?

“Is it OK to suggest that men are not entitled to simply be loved for who they are as a person?” the male commenter asked.

That question forced me to self-reflect more than almost any question I’ve been asked in the four years I’ve been writing here.

I think it’s quite simple. NOT to decipher. It’s way too subtle and requires vigilant communication and a mindful, willful desire to achieve a high level of bridged understanding with another person whose differences might frustrate you and create discomfort.

There’s nothing easy about it. But it is simple.

If a relationship’s survival depends on HURTFUL things coming to an end, then I perceive it to be largely on the shoulders of the person causing the pain to stop, or at minimum, to actively seek ways to minimize it because they love and respect the person they married.

If a relationship’s survival hinges on two people finding balance between personal preferences and conveniences, then I think it’s profoundly important that the two people love and respect one another enough to make damn sure these matters of disagreement DO NOT cause damage to one another.

Because here’s what happens.

And it strikes me as being perfectly okay to not sign up for a lifetime together with someone whose preferences or reactions to events do not align with yours. By all means, don’t get married if you believe the relationship is doomed to fail.

It strikes me as perfectly NOT OKAY to promise in front of witnesses, friends, and family; and sign legal contracts, and—most importantly—be assuring one’s partner or fiancé/fiancée throughout the length of an engagement that you’re in this forever to either:

A person who threatens a marriage by treating their spouse as if they aren’t good enough because of a difference in PREFERENCES is every bit as bad as the shitty spouse who damages their partner through intentional or neglectful harm.

Love is a choice.

And when we marry someone, we are to give that love freely for the rest of our lives. But NOT when our marriage vows have been broken by someone who refused to give the love and empathy marriage requires.

How do we get two people to actively choose to love one another, even when they don’t “feel” like it?

But that’s what a shitty spouse is—someone who won’t give love because it’s inconvenient or doesn’t feel good.

Amidst the chaos of war in the middle of the battlefield, where both sides are firing shots and taking no prisoners, it’s really hard to tell.

So, I looked in the mirror and figured out who to blame for my divorce.

Because there’s a better life out there. One I didn’t find blaming everyone else for my problems. But after looking into that reflection long enough and hard enough, I think it might be coming into focus.