The Strangers We Live With: Maybe Birth Control, Food & Aging Dooms Our Relationships 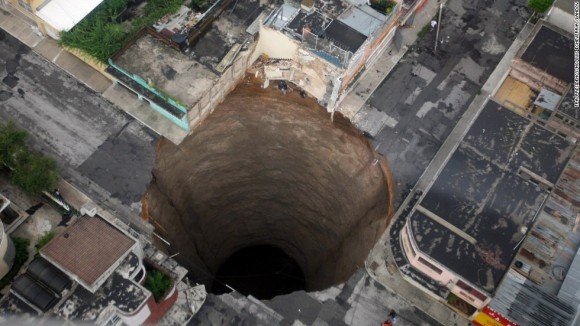 Sinkholes open without warning, sometimes destroying things and killing people. I think body chemistry might work that way, too. (Image/CNN)

Even the most-honest people lie sometimes.

When we love or even just like someone, the last thing we want to tell them is that we don’t like their new haircut, or that the meal they just prepared for us tastes gross, or that their ass totally looks fat in those jeans.

Maybe that’s not a “lie.” When you’re trying to protect someone’s feelings. Or maybe it is, but it’s not bad due to its noble intentions.

Or maybe a lie is a lie, and it’s ultimately bad no matter how well-intentioned it is because dishonesty is NEVER better than honesty. I don’t think we’ll ever know because humans are never going to collectively start telling the whole truth.

So, maybe we’ll never really know why attraction went away and they left. Or why we chose someone else. Or why love died. Or whether love and attraction were ever present in the first place.

Maybe everyone has a secret they’ll never tell. And maybe being afraid of everyone, or even just one person, discovering that secret will keep us “lying” our entire lives.

Maybe those lies—or rather undiscovered truths—will prevent us from ever “solving” the problems that harm or end our relationships, sometimes ruining our lives.

Maybe we never really know someone all the way.

And, just maybe, even if we do know someone all the way, they don’t always stay the person we’ve gotten to know.

And, just maybe, we don’t always stay the person we think we’ve gotten to know.

And, just maybe, when you can no longer recognize yourself in the mirror, all bets are off.

Why Do So Many Relationships Go Bad?

Let the record show that until proven otherwise, I maintain the stance that Shitty Husbandry (which is mostly accidental) is the No. 1 cause of failed marriages and divorce.

But there’s something else that happens to people which we’ve rarely, if ever, discussed here. All humans are affected by changing hormone levels and body chemistry at different points in our lives for various reasons. And while I’m no science whiz, I’m reasonably confident in saying that, when you change something’s literal chemistry, that thing always changes into another thing.

You don’t even have to change the actual building blocks to change something into something else.

Mix carbon and oxygen so that there are two units of oxygen for every unit of carbon, and you get carbon dioxide (CO2), which is our friend, and used by trees and grass to produce breathable air.

By simply reducing by half the amount of oxygen in the equation, you create carbon monoxide (CO). And if you don’t know, that shit will kill you.

The difference between Life and Death.

All because you changed the amount of one of just two basic ingredients.

Which begs the questions, I think:

Can changes in our hormone levels—our literal body chemistry—turn us into entirely different people?

Isn’t it possible that we all change into different people who sometimes transition into people unattracted to, or incompatible with our partners?

Isn’t it possible that we all change into different people, and that sometimes, our partners don’t like nor are attracted to the new and different versions of us?

Isn’t it possible that we all end up living with strangers or discovering them in our reflections, and that when one or both members of a marriage change into someone else, it strains the relationship in ways difficult or impossible to properly repair?

Maybe Hormones are the Sinkholes of Relationships

Let me just say this: Sinkholes are bullshit.

There are a lot of things to be afraid of in life. Natural disasters and disease and mortal enemies and other things. And most responsible people take precautionary measures to avoid these things when possible, which is how the human race has survived to this point.

But sometimes, you’re just sleeping in your bedroom at night, and then the ground gives way beneath your home, and your house falls down into the planet, and then you die.

It’s pretty much the least-fair thing I can think of. And the thing I am theoretically most afraid of due to its fundamental randomness. I can’t even trust the ground I stand on.

And when We died, I don’t think either of us were still the same person who met at that college party 15 years earlier.

The birth-control pill, in particular, interests me because it has been demonstrated to take away a biological tool women use to choose partners—smell. Pheromone detection via the olfactory system. It’s a thing, I guess.

According to this article in The Telegraph (U.K.): “…the Pill could stop women picking up these important genetic clues because it alters hormones which make the body think it is pregnant. While that stops women getting pregnant it also means they would rather be surrounded by close family members, and so are more attracted to people who are genetically similar. And for choosing a partner, that is dreadful.”

Most forms of contraception (about 60-ish%) affect hormone levels as well.

Estrogen, progresterone, testosterone, adrenaline and cortisol are some relatively well-known hormones. Leptin and ghrelin are some appetite-related lesser-known ones.

We all have all of these hormones. But as the levels of one or many increase or decrease, we literally become different versions of ourselves.

Different versions who tend to be shitty at the things that keep marriages thriving, or even simply afloat.

The food we eat matters.

Men today have significantly lower testosterone levels than our fathers and grandfathers. Some of the pesticides used to grow much of our food has high estrogen levels, which many in the science community point to as an explanation.

The food supply would affect women equally, on top of the previously mentioned changes.

Lifestyle factors like sleep, poor nutrition and a lack of exercise all affect us as well.

Sinkholes scare me. And they’re a bullshit, unfair wrinkle in our collective efforts to not die.

Affecting all of us indiscriminately.

Turning people into someone else.

And maybe if everyone keeps on hiding the changes we feel because of this or that, maybe we’re all doomed to end up living with strangers.

Even when we live alone.

(Update: Edited to correct nonsense scientific claim that trees and grass produced carbon dioxide rather than oxygen, because we don’t live on Venus.)

61 thoughts on “The Strangers We Live With: Maybe Birth Control, Food & Aging Dooms Our Relationships”