21 Comments
By Matt Being Human, Life

Maybe You’re Giving Too Many F*cks: A Q&A With Author Mark Manson 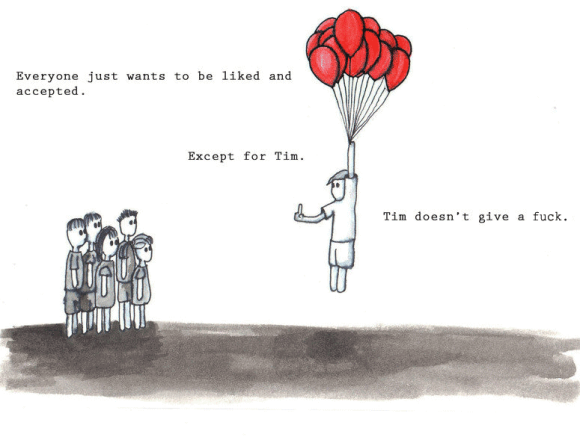 This makes me laugh every time I see it. You go, Tim. (Image/markmanson.net)

More than usual. I used to publish many bad words here, but have cut back, probably because I worry too much about what other people think. Which is bad.

That’s what Mark Manson’s new book “The Subtle Art of Not Giving a F*ck: The Counterintuitive Approach to Living a Good Life“ is mostly about (along with Mark’s original blog post which inspired it).

We all spend a lot of time and energy on trying to be who and what we think other people want us to be. And it leaves us feeling a little dirty and dissatisfied because it’s inauthentic and bullshitty.

But sometimes, I think we MUST feel uncomfortable, because that’s when we figure out what really matters and what doesn’t.

I don’t intentionally cuss in front of children (or my grandma), and I value politeness and respecting others’ opinions.

But once in a while, boats need rocked, beliefs need challenged, and taking a counterintuitive approach is what’s needed to live well.

But for this post, at least? I just don’t give a fuck.

F-bombing the book title is a bold choice. The word “Shitty” will live in mine.

Mark Manson is one of my favorite writers, possibly my very favorite.

He’s smart. He’s funny. And many of the things he writes hit me in that place where your mind, heart and body go: Ohhh. That feels uncomfortably true.

Other than me being a big fan and admirer of his work, Mark and I don’t know each other. I’m not pimping Mark’s new book for any other reason than I believe his writing has the ability to help certain people have better lives.

I truly believe that Mark’s work helps humans flourish. And that matters.

I think you should read his book. It would be awesome of you to buy a copy. By the time you read this, my pre-ordered copy should be sitting atop my book stack. Which is awesome.

A Q&A With Mark Manson

Matt: I’ve read a lot of your work and have been majorly influenced by a handful of your ideas. I value your opinions. What is so important to you about this specific concept that made it meaningful enough to dedicate an entire book to it?

Mark: I wanted to write a book about the importance of pain — that pain is often a good and necessary thing in life. It’s something that’s not said often and I feel like in our overly-consumer culture these days with social media and everything, it’s more important than ever for people to allow life to suck sometimes. They need to learn how to stop giving a fuck about everything all the time. In a sense, you could say it’s an approach to personal growth not through pursuing and achieving more, but rather by pursuing and achieving less.

Matt: I mostly write about relationships (the dating/marriage kind). How can learning how to give fewer fucks help someone or couples experience greater relationship success?

Mark: Not giving a fuck is essentially about choosing what to care about: choosing your priorities, your values. Most people who struggle in the dating/relationship area struggle because they’re giving too many fucks about the wrong things — being admired or receiving validation, avoiding rejection, or pumping up their own ego. For a relationship to function and flourish, one needs to get clear about what truly matters to them and what does not, and then develop the ability to sort and screen through potential partners to find someone who shares those values.

Matt: It was you who introduced me to David Foster Wallace’s commencement speech which you shared in your post “This is Water.” It had the same chemistry-shifting impact on me as I believe it did on you. (So, thanks.) How do we balance in healthy ways critical concepts like Awareness and Empathy with the self-preservation techniques of fuckage withholdment?

Mark: One of the subtleties to not giving a fuck is that it’s not about being indifferent, it’s about being comfortable with being different. Many people see not giving a fuck as this armor of indifference — by learning to not care about anything, they’ll protect themselves from being hurt. But the truth is that indifference is just another way of giving too many fucks. To truly not give a fuck about what does not matter, we must first discover those things in our life that matter the most.

Matt: If you had to pick just one of your articles, which would you choose that hit on one of those life-altering moments for you, in an effort to help others see the world as you believe it is?

Mark: It’s funny, the articles I love the most are often not the articles that readers get the most out of and vice-versa. For me though, the biggest ones would probably be “Being Special Isn’t So Special,” “Love is Not Enough” and “The Four Stages of Life.”

Matt: One of the great lessons of adulthood for me has been learning about Hedonic Adaptation. It is, in my estimation, the root cause of human dissatisfaction across the board, from how we always grow tired of our shiny new toys, adjust to pay increases, and perhaps most importantly, take for granted our romantic partners. What besides Mindfulness would you recommend to people (especially guys) for combating that psychological condition on behalf of their marriages and families?

Mark: The hedonic treadmill usually only applies to superficial, worldly pursuits — earning more money, buying nicer cars, banging more women, etc. This is why these things are generally considered superficial values and poor things to pursue (or to put another way, poor places to invest your fucks). As humans, we need a sense of progress in order to feel happy, therefore it’s important to choose goals and values that have no definitive end to them — becoming a great musician, being a good father, having a pleasant social life, etc. These are things that can always be worked on and improved upon.

Matt: The No. 1 question I get is: “How can I get my husband to understand what you’ve written here? He never listens to me any time I say anything he perceives as critical.” I care about helping others, and I believe husbands actively listening to their wives (hearing her, I mean; not following her directives) would dramatically improve relationships/marriage. What advice would you give women on how to communicate concerns or dissatisfaction in ways men are more likely to truly listen to?

Mark: Questions like this are hard because they’re so person-dependent. It’s hard to say with certainty without knowing the couple. After all, maybe there’s something in the wife’s communication style that is preventing him from hearing her. Maybe the husband has some deep insecurity that is causing him to avoid dealing with the issue. It could be a million things.

But in general, the short answer, is that whenever someone in a relationship has problems with their partner, it always needs to be communicated in such a way that responsibility or blame for each person’s emotions are not shifted to the other. For instance, many people naturally approach their partner by saying something like, “You don’t care about me and make me feel horrible because all you want to do is X.” Because this is said in such a way that puts all of the responsibility on the partner, they will naturally become defensive or seek a way to avoid dealing with it. After all, I can’t control how my wife feels 24/7!

A much better way to communicate it is something like, “When you do X, it often causes me to think/feel badly because I feel unloved. Maybe that’s my own insecurity, but is there something we can do to make it better?” In this example, the person approaching their partner with the problem is owning their responsibility for their own feelings and reactions, and are looking to find some solution. There’s no blame or guilt-tripping going on. This is far more likely to be successful.

Then again, a lot of men are raised and socialized to be emotionally shut down and distant from pretty much everyone (but especially women), so it can be a much more long-term issue that may actually have little to do with the wife herself.

A big thank-you to Mark for making time for our tiny corner of the internet.

If you think as highly of Mark’s work as I do, perhaps you’ll give his new book a read and share it with anyone in your life who might benefit from it.

This sort of thing is good for everybody.

Because we mostly give too many fucks about the wrong things. And it makes us feel bad as we invest in other people’s opinions of us, or chasing things that ultimately leave us feeling empty.

Remember: Fuckage withholdment isn’t about being indifferent. It’s about being comfortable with being different.

We can participate in bullshit group-think and try to blend in.

Or we can be like Tim in the image up top. Each of us gets to decide.

Now, where did I leave those red balloons?

21 thoughts on “Maybe You’re Giving Too Many F*cks: A Q&A With Author Mark Manson”