Why Marriage Counseling is a Bad Idea, Vol. 1 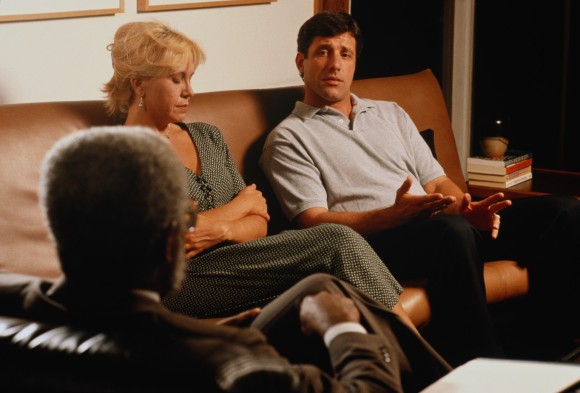 A wife asked her husband to read my ‘Shitty Husbands’ posts, which happens more than I’d like. (Because passive-aggressively telling your husband he’s not good enough WILL NOT improve your marriage.)

Then she wrote me an email asking for advice, which also happens more than I’d like. (Because I’m just some guy who doesn’t really know anything, and got divorced the only time I was married.)

In that email, she wrote: “He started reading and said: ‘Fuck that guy. Is he a therapist?’”

I assume MOST men have that response when they read those posts. It’s the same thing I would have said five years ago: Who cares what this idiot thinks? He got a divorce and I’m still married. I’m already doing better than him by default!

I don’t blame the guy for feeling that way. He suffers from the same affliction affecting most married men: Oblivious Husband Syndrome. (Which I totally made up, and could just as easily be called: Oblivious Man Syndrome.)

Our brains (both male and female) contain translators, so that when people speak to us, or we observe something, our brains can process what we’re hearing or seeing and apply meaning to it.

So when we see a “Don’t Turn on Red” traffic sign, we understand it to mean that at particular traffic intersections, we are not allowed to make right turns when the light is red, even though American drivers are accustomed to doing that. We know what the color red looks like. So we’re not sitting there avoiding right turns at green lights while a bunch of pissed-off drivers wait behind us.

Sometimes though, our translators are shitty. Sometimes, we need information in English, but it gives us Portuguese or Mandarin or Arabic instead.

And that’s because a member of the opposite sex is talking to us. And because men are from Mars and women are from Venus, and because men are like waffles and women are like spaghetti, when a man says something to a woman or acts like himself around her, or a woman says something to a man or acts like herself around him, it’s not uncommon for neither person to know what the hell the other person is talking about or trying to accomplish.

Men often don’t understand women because women often speak and act in code. Other women know exactly what the code means. Because of this, many women don’t understand why their husbands or boyfriends don’t get it also. The only conclusion is that he’s a stupid moron. And in the context of the way her mind naturally works, it’s a perfectly logical conclusion.

Women often don’t understand men because men are often lousy communicators. We stay quiet about our feelings for a variety of reasons, and we have a hard time patiently listening to problems or stories because we have a tendency to problem-solve. When our wives or girlfriends are telling us a story, the ENTIRE point for them is the act of telling the story and having their husbands or boyfriends listen to it and acknowledge it.

The problem is, the men listening tend to not be interested in the nuance in her story, and are more interested in whatever “the point” is. Once they understand the point, the men can provide solutions to their wives’ or girlfriends’ problems, or solutions to whomever the story is about. That’s his goal. To solve the problem and eliminate the need for discussion.

The process is painful to the guy because he tried to help and listen, but she didn’t want him to help, and now he’s frustrated and feeling unappreciated.

It’s painful to his wife or girlfriend because, once again, he’s demonstrating insensitivity and an inability to really listen and be there for her in matters big or small.

The man thinks he was being helpful. The woman thinks he’s an insensitive dick. The only conclusion for the guy to come to is that she’s overly dramatic, emotional and crazy. And in the context of the way his mind naturally works, it’s a perfectly logical conclusion.

This is just one all-too-common example of how men and women fail to communicate effectively with one another, and at the end of the day, it causes more breakups and divorce than anything else.

The fundamental breakdown in a romantic relationship between men and women can be traced back to their inability to empathize with one another or to meet their partners halfway. Instead, we try hitting our partners over the head repeatedly until they finally “get” us, or concede that our way is best. (They never will. The most we can hope for are highly functional translators.)

“Empathy doesn’t involve feeling sorry for someone. It is our honest answer to the question, ‘why did they do what they did?’

The useful answer is rarely, ‘because they’re stupid.’ Or even, ‘because they’re evil.’ In fact, most of the time, people with similar information, similar beliefs and similar apparent choices will choose similar actions. So if you want to know why someone does what they do, start with what they know, what they believe and where they came from.

Dismissing actions we don’t admire merely because we don’t care enough to have empathy is rarely going to help us make the change we seek. It doesn’t help us understand, and it creates a gulf that drives us apart.”

All of this is leading me to my strong belief that the vast majority of couples make a huge mistake going to marriage counseling or couples counseling together. I hope marriage counselors don’t get upset with me for writing that, but some probably will.

I started thinking about it when a husband whose wife is just about to leave him said: “Fuck that guy. Is he a therapist?”

I don’t give advice. I just tell you what happened to me.

There are marriage-counseling success stories. Just like sometimes, people actually win the lottery. Because some counselors are great, and some people are blessed to be married to partners willing to humble themselves and learn to empathize.

But most of the time?

It’s a gut-wrenching, resentment-building, bank account-draining affair that drives couples further apart because men and women frequently demonstrate an inability or unwillingness to understand one another.

I think couples counseling is a bad idea.

Soon, I’ll tell you why.

35 thoughts on “Why Marriage Counseling is a Bad Idea, Vol. 1”