17 Comments
By Matt Being Human, Parenting, Stuff I Need Help With

This is not my son. I’m exploiting someone else’s child in addition to my own.

It must have been between songs, because I tend to play music loudly, even with my five-year-old son in the Jeep.

But I know what I heard.

“Hey! What’d you just say?” I asked him over my shoulder.

Maybe I was just hearing things. He’s only five. He doesn’t know what he’s saying half the time. And where would he learn to talk like that anyway?

Suddenly, a driver switched lanes in front of me without using a turn signal, forcing me to tap my brakes, move my steering wheel maybe an inch, and go insane for three seconds. I involuntarily screamed: “WHAT’S YOUR FUCKING PROBLEM, DIPSHIT!?!?”

I cringed and braved a glance toward the backseat to make sure my kindergartner was still blissfully wrapped up in his video game.

I’ve worked my current job for two and a half years.

In that short time, I’ve been called into my boss’ office at least four times and asked to watch my language and to refrain from using large, inanimate objects as huge, fake penises. (For the record, he swears every bit as much as I do. He’s just more discerning in his timing. Or as I like to say, less honest.)

I don’t care what you think about it. I’m going to die someday. Maybe tomorrow. Maybe in three minutes.

And a bunch of terrible shit is always happening to me, you and everyone else.

Adrian Peterson’s little two-year-old son was beaten to death by one of the world’s worst human beings last week. Our federal government is shut down and it barely matters to the average American because we’re too busy playing on our iPhones OR trying to cope with whatever horrible thing is happening in our personal lives.

I’m just not going to sit around being serious all the time. I’m not.

If that makes me immature, then fine. I’m immature.

If that makes me an inadequate, asshole father, then fine. Tell me something I don’t know.

I’ve written this once before, and it was super-true, so I’m going to again: I’ve never been particularly bad. But I’ve always been pretty mischievous.

And I can’t stop.

And you know what else I’m not (part of the time)?

So, when my son is mischievous once in a while, what am I supposed to do? Give him the old “Do as I say, not as I do” speech? That speech is bullshit. And I have a feeling he’s already smart enough to know that.

Because he’s my little man.

Because my son is me and I am my father and my father was a troublemaker, he let me watch movies he probably shouldn’t have when I was young.

Not like hardcore pornography and serial killer documentaries or anything, but PG-13 stuff where they said bad words here and there. Like Teen Wolf and Back to the Future when I was only six or seven years old. Actually, they were PG. But it was PG-13, by today’s standards.

It was watching those movies where I learned every bad word except “Fuck,” the black mamba of swear words, and one I wish I used much less than I do.

One time, when I was six or seven, I was riding in the backseat of my dad’s white early 80s Chevy Caprice Classic, probably listening to REO Speedwagon or Prince. My aunt was in the front passenger seat.

My dad said something that prompted me to bust out some of my newly learned vocab words.

“You stupid bastard!” I verbally jabbed from the backseat.

My dad and aunt looked at one another, pausing for a beat, then burst out laughing.

“Where did you learn the word ‘bastard’?” Dad asked.

“Did you know that was a bad word?” he asked.

“It’s a bad word, son. And one children should not say or hear,” he said.

My aunt chimed in.

“Do you know what a bastard is, Matt?”

“It’s a mean name for someone you don’t like,” she said. “Do you want to call your dad mean things?”

“Good. It’s not nice to call people bastards,” she said.

And I never did that again until I was old enough to mean it.

Dammit, the Delivery is Perfect

But here’s the thing.

He kills it. He’s five! I’m proud of him when he does big-boy stuff.

And busting a perfectly timed “Dammit” IS a big-boy thing.

Owen: “Hey Dad! Check out this cool tower I built!”

Owen: “Hey Dad! Can I watch a show after my bath?”

And when I say, it’s perfect, I mean it. It’s perfect. Just the right tone. Not angry. Just sort of mock disappointment.

I laugh every time he does it. Bad dad!

But I always calmly explain why we don’t say that word in terms he can understand. How it’s only for adults. Like beer and caffeine and heroin. (I’m kidding about the caffeine.)

I remind him that if he ever says it at school, he’ll immediately have a “red day.” They have color-coded behavior charts. He’s been doing REALLY well lately. Lots and lots of green days. The day he took out his penis and showed it to other kids was a red day.

I don’t want my five-year-old son to use swear words. I don’t condone it. And I don’t celebrate it. And I wish I used nicer words myself.

But I’m also not going to lie to you about this.

I ONLY care because society cares. I sort of don’t. I get morally outraged about all kinds of things. I want to protect my son from all of the horrors in this world.

But a well-timed “Dammit”? Totally not one of them.

I’m not even kidding. The kid kills it.

I mean, it’s almost as if he learned it from someone. 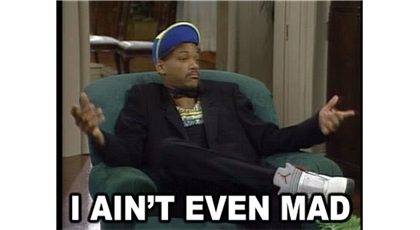