3 Comments
By Matt Being Human, Random

Bad Luck Brian is My Neighbor

I thought I had the market cornered on misfortune.

And it turns out I’m not even the unluckiest guy in my neighborhood.

The randomness and hilarity of this discovery makes me happy.

He’s the perfect kind of famous. Famous enough to capitalize on his Internet success. But anonymous enough to live as normally as he wants to.

His real name is not Brian. Yeah, I was disappointed too.

His next-door neighbors probably don’t know who he is, yet he once got stopped at an airport bar by a couple Indonesian airline pilots who recognized him from his viral memes.

How I Met Bad Luck Brian

My neighbor John from a couple doors down had come over to check out my new Jeep. We drank a beer in my driveway.

A pickup truck pulled in front of his house.

I chuckled. He must know someone who looks like him. That’s funny that he knows that Internet joke too, I thought. 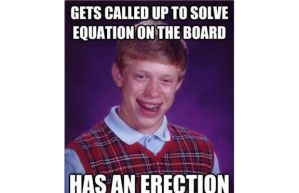 “He was just out in L.A. shooting videos with The Overly Attached Girlfriend,” John said.

“Yeah. Bad Luck Brian. It’s one of the biggest things on the Internet. Do you know it?” he said.

“He’s going to marry my daughter,” he said. “I hope he makes a billion dollars.”

I thought he was kidding. I had some yard work to finish. So I said goodnight, watched John walk home and greet the guy he called Bad Luck Brian in his driveway. Bad Luck Brian had brought over a pizza for dinner.

Is that really him?

The next day, I decided I had to know.

I texted John: “Is that REALLY Bad Luck Brian? The actual guy from the Internet meme?”

He replied: “The one and only.”

Me: “You have no idea how interesting I find this.”

John replied by telling me what street he lives on, just five short blocks west of my house.

Within five minutes, John had pulled into my driveway in his classic 1968 Ford pickup.

Three minutes later, I was standing in the guy’s living room. He’s very nice and apparently accustomed to people like me being curious about people like him.

I gave him my business card and told him what I do professionally.

Then I told him about this blog, and asked: “So. Bad Luck Brian. Do you think there’s any chance of doing a Q&A with you for my blog?” 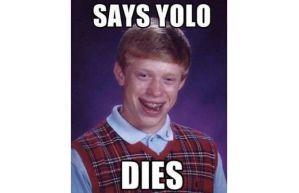 I explained that my life is total shit and that I thoroughly enjoyed the idea of Bad Luck Brian weighing in on how to deal with it all.

He agreed and it will be happening soon.

He showed me around his place, explained that he’d just gotten back from Southern California where he shot his first video, which at the time had yet to be published on his YouTube channel.

I love the Internet, so everything about this is awesome to me.

3 thoughts on “Bad Luck Brian is My Neighbor”